The heart-warming stories of migrants who’ve overcome adversity to successfully live and work in WA have gone on show as part of a joint project between MercyCare, RootsTV, The Kaleidoscope Initiative and the City of Stirling.

The Migrant Employment Stories, made up of four short films were launched at an event at the Stirling Business Centre last night. 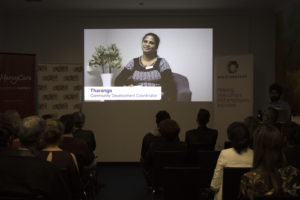 One of the faces of the films is Tharanga De Silva, a Sri Lankan migrant who came to Australia in search of better opportunities for her young son.

Mrs De Silva went from working as a lawyer for the United Nations to being employed in an aged care kitchen in Perth.

“It was hard initially as a newcomer, but then I later realised it was a good start to learn the culture and understand how the WA workplace works. It was essentially cultural transition training,” Mrs De Silva said. “I was encouraged to share my story because as a newcomer it is very hard to get started and if I can help others realise there are many opportunities in this country the and that is a good thing,” she said.

Mrs De Silva now works as a community development coordinator at Assets, an organisation that assists refugees rebuild their lives.

“the films showcase the employment journey that many migrants undertake, highlighting their challenges and successes and the strategies they have used to adapt to new cultural and employment settings. They also share the perspective of employers, who explain various aspects to consider in employing a culturally diverse workforce and the benefits this brings to the workplace. The project aims to create awareness to both newcomers and employers to promote that it is possible to make a successful employment transition,” Ms Murray said.

As part of the making of the films, RootsTV engaged at-risk young West Australians to help them build skills in film and media.

The project complements the City of Stirling’s Kaleidoscope Initiative, which is all about harnessing the economic benefits of migration by supporting newcomers to obtain employment in their field of expertise and building the capacity of employers to reap the rewards of a diverse workforce.

The MercyCare Career Centre in Mirrabooka is a specialist service that assists people from a culturally and linguistically diverse background to make informed educational, training and work choices.

RootsTV is a community organisation providing training for young people in digital media and a platform for community groups to connect with each other.

The Kaleidoscope Initiative is being implemented under a local government and corporate partnership and is partially funded by the Western Australian Government through the Office of Multicultural Interests.